skip to main | skip to sidebar

Rotary General Secretary John Hewko and six RI staff members
bicycled 104 miles in Tucson Arizona, USA, on Saturday,
for the Miles to End Polio event,
raising more than $6 million for polio eradication.
The money raised by Rotary will receive a two-to-one match
from the Bill and Melinda Gates Foundation.
In addition to the team from Evanston,
100 Rotary member riders took part in the ride.
The fundraising ride is part of the annual El Tour de Tucson
bike event in Tucson, Arizona, USA.
The race attracts more than 9,000 cyclists a year,
making it one of the top cycling events in the U.S.
The Rotary team from Evanston was joined by Rotary members
from Arizona's District 5500,
and other members from around the world.
Hewko tweeted that he finished the race in 5 hours and 2 minutes.
"Really enjoyed riding in El Tour de Tucson
along with 100 Rotarians and members of the Rotary International staff,"
Hewko added. "As a group we were able to raise over $6 million
for polio eradication which will help bring us even closer
to the dream of a polio-free world.
I am deeply moved by the generosity and passion
of Rotarians around the world and Rotary staff."

Rotary Institutes
Held annually in each Rotary International zone,
they have for many years been an opportunity
for Past District Governors to meet, contribute, discuss
and be informed about aspects of Rotary, including policies,
finances and projects, including those of the Foundation.
Leading up to the Institute are training sessions
for the District Governors Elect and Nominee,
and a symposium for the current Governors,
all of whom then take part in the Institute's proceedings.
The Wellington 2014 Institute will be at the Michael Fowler Centre

Paymon with his parents: Saeed and Parvaneh (from Iran)

60 Years ago, Mt Lawley Rotary Club
spawned the Rotary Club of West Perth
and last Friday was the time to celebrate.
We were reminded of sixty years of local, national
and international charities and community groups
which have been supported by the efforts
of one of many groups of dedicated people
who commit time and effort trying to make the world a better place.
Instead of a host of formal speeches,
MC Steve Thomas undertook a series of informal discussions
with Rotarians who had provided notable achievements
during that 60 year period.
It worked very well.
The evening also saw the awarding
of Paul Harris Fellows to the following:

John Mansfield / Gerry McGann
This week the community service group delivered
over 600 kilo’s of food to Southcare.
That’s a lot of food !!.
This food will be divided into more than 200Christmas hampers
to go to the needy inthe South Perth/Como area.
The food was sourced from Foodbank
and also from a wholesale warehouse,
maximising the return on our hard earned dollars .
The photo shows just
come of the goodies that we collected from Foodbank.

And at Conti's Winery


Speaker PDG Ian Murray
is an advocate for Prostate cancer awareness.
Ian is a former School Principal,
is a Men’s Health Ambassador for Australia,
active JP, member of The Order of Australia
and a prostate cancer survivor

At the local meeting

Recently our Vocational Director
(and major player in our Earbus Project),
Nick, visited the Karrinyup Innerwheel Club
where he spoke about our plans for securing a custom made
"Earbus" for use by the Earbus Foundation of WA in the Kimberley.
Not only were the ladies of Innerwheel most impressed,
Nick came away cheque from them supporting our project,
which was presented to President Carolyn
on Wednesday night.

we were pleased to be able to hand over a further cheque
to Greg Hebble, CEO of Foodbank WA.
Not only do they do a great job of redistributing oversupplied
and donated food to those in need,
currently Foodbank WA are supplying breakfast
to around 17 000 West Australian schoolchildren
- great work Foodbank!

Haydn Green (pictured here with Brian), his discussion of "Real Life CSI",
and his experiences in forensics.

Rotary Club of Byford and Districts

It's always good to meet and greet with our volunteer partners
the Serpentine Jarrahdale Lions at the Dragon Inn Chinese restaurant last week.
Thanks to Pres Bent and the Lions members
who welcomed us to their event.
Australia Day 2015 is coming up fast and we will be joining forces again
to do the BBQ breakfast at the Serpentine Camping Site on Transit Road

We were joined by our Four Way Speaking Test representative,
Brandon Boccolo from Perth Modern School.
Brandon was well supported by his Mum Cheryl

Rotary Club of Applecross
SUNDOWNER at the Palmer's Home 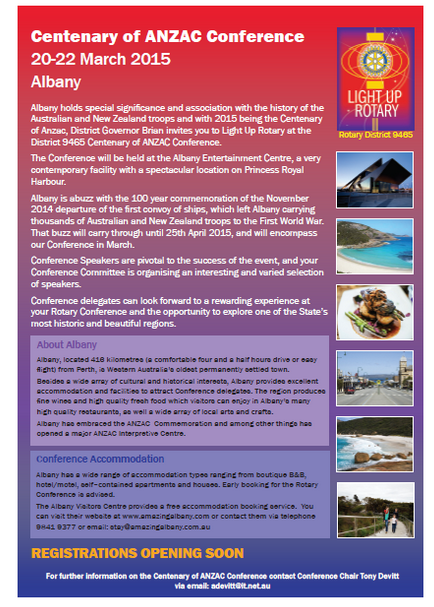 Monty The Penguin is another wonderful Christmas story
from upmarket department store John Lewis.
Monty the Penguin enjoys the time he spends
with his friend the little boy but something is lacking in his life.
The little boy gets him a Christmas gift he’ll cherish forever.

British Telecom needed to hire a team of telephone pole installers,
and the boss had to


choose between a team of two guys from England
and a team of two Irish guys.
So the boss met both teams and said
"Here's what we'll do.
Each team will be
installing poles out on the new road for a day.
The team that installs the most poles gets the job."
Both teams headed right out.
At end of the shift,  the two English guys,
came back and the boss asked them how many they had installed.
They said that it was tough going,
but they'd put in twelve.
Forty-five minutes later Paddy and Mick,
the Irish guys, came back in and
they were totally exhausted.
The boss asked,
"Well, how many poles did you guys install?"
Mick, the team leader, wiped his brow and sighed,
"Paddy and me, we got
three in."
"The boss gasped, "Three?
Those two English  guys put in twelve!"
"Yeah," said Mick,
"but you should see how much they left sticking out of
the ground!

thanks to Robyn Penny  Rotary Club of East Perth

Lake Argyle
Posted by Phils Phun at 1:20 PM No comments: